Growing up, my most memorable Thanksgiving was a non-Thanksgiving. 90% of my extended family lived in the Portland area, so all family events took place there, but we lived 3-4 hours away in southern Oregon.

After moving to the east coast, 3 hours became a multi-state, massive travel undertaking. Way out west, it was all in a day to take 3 hours to get anywhere that had more than a few thousand people. No big whoop.

One particular year we were not going to travel to Portland until Thanksgiving Day, probably because my parents had to work late the night before, or maybe they just didn't want to spend that much time with family. Whatever the case, that year there was one of our random snow events that strike the Willamette Valley every few years (most of the snow is in the mountains).

Given a 1/2 inch of snow, most Oregon drivers will react as if Mount St Helens had sprouted a local fissure and only a ragtag crew of miners armed with Aerosmith ballads were there to save us. Well, it was Thanksgiving, and even Aerosmith needs to take a break from rocking every once in a while, so needless to say we didn't even attempt to travel that morning. Instead we opted to make do with Thanksgiving dinner scraped together from what we had at home. That meant chicken nuggets and whatever vegetable/potato material was in the deep freezer.

In other words: Best. Thanksgiving. Ever.

Luckily we had a well stocked freezer from the Schwan's man. In our area, Schwan's was a catalog type service like Avon, but with frozen food. The Schwan's man would come around in his freezer truck and take your order for giant boxes of said chicken nuggets, Steak-umms, and creamsicle push pops. 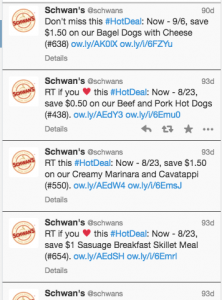 A couple weeks later he would deliver the goods, payment apparently due at that point. For a certain period we had to duck the Schwan's man (ha!) when he came to the door, our mom suddenly telling us to be silent and duck down from the windows.

But that year, that year we feasted on pressed, cut, and breaded chicken and a cornucopia of dipping sauces that had been well-aged in the fridge door. Then we headed outside to play in the balmy November weather in our low valley town where it snowed even less frequently than up north and the Douglas fir studded hills surrounding us were green all year round.

Tragedy was averted. The Schwan's man was home enjoying his own dinner of assorted foods baked at 325° for 45-55 minutes. And no turkeys were harmed in the making of this memory.