According to MoMA, this exhibition, organized by Barbara London, “looks at the dynamic connections that occurred from the mid-1960s to the mid-1970s with a display of early media works by Nam June Paik, Bruce Nauman, Steve Reich, Joan Jonas, Yoko Ono, Laurie Anderson, and David Bowie presented alongside related drawings, prints, and photographs by John Cage, Jack Smith, Ray Johnson, and others.”

AudioVisual Preservation Solutions worked with the original sound elements at MoMA to produce preservation masters and exhibition copies for the audio portions of the exhibit.

The unique challenges faced by arts organizations for preservation and exhibition of both sound and moving image aspects of multimedia art works require close coordination between the artists, curators, conservators and preservation reformatting experts like AVPS.

Unlike static art objects, dynamic media requires reformatting for the purposes of both preservation and future exhibition or access. These requirements present choices which must be made in an environment of developing standards that are significantly different than the well established standards and practices for preservation and exhibition of traditional fine art pieces.

AudioVisual Preservation Solutions is pleased to work with The Museum of Modern Art, and other museums and performing arts institutions in developing the expertise required to preserve their legacy works well into the future.

The exhibition dates are August 13, 2008–January 5, 2009, and it is located on the second floor of the museum in the Yoshiko and Akio Morita Gallery.
For additional information about the exhibition click the link below.

Click to listen to an interview by Barbara London from MoMA with Laurie Anderson on the creation of the Self Playing Violin from http://www.moma.org/audio_file/audio_file/957/Looking_292l.mp3 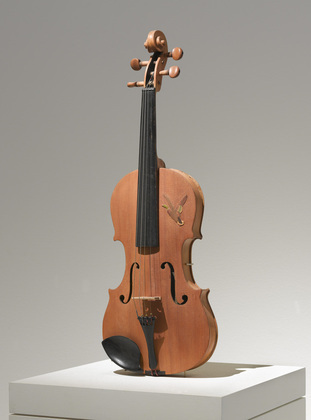