Among the less savory identities I tried on in my middle school years as I fished around from some sort of individuality was that of a sports stat head -- the kind of person that would give a detailed speech on how to pitch for the Public Speaking section of Language Arts class but who wouldn't pick up a baseball unless cleaning up after one's tomboy sisters.

I liked to think that I distinguished myself through my abstruse selectivity of which teams or athletes I focused my attentions on, leaning heavily towards the underdog, the old-timer nearing or beyond 40 years of age (in a pre-PED era, mind you), the outlier, the mudder... Watching Dale Murphy pop home runs in a sad, empty Atlanta-Fulton County Stadium was much more interesting to me than another Montana-Rice downfield bomb. 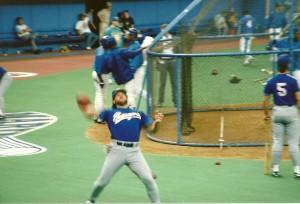 I have a much deeper appreciation of Pete Incaviglia than you do.

(Caveat: At that time, my hometown was well outside the terrestrial broadcast range of all but one professional sports team, so I really didn't have a lot of choice in what teams the networks or cable would occasionally show, and thus for whom I would root.)

The amount of intellectual control evinced in the article is impressive, and the methodology/workflow in its documentation is, for lack of better words, reallyreallycool (he said, pushing his glasses up). Switching to the other side of the plate to bat, however, I think there are some further instructive lessons here. First, no archivist should feel inadequate. MLB has a number of incentives driving these efforts, incentives that are several degrees of magnitude greater -- in terms of fiscal economics -- than for most AV collections. The almost hourly need during baseball season to distribute information and content externally via the web and broadcast programs, internally via workflows that monitor games and umpiring, and archivally via the identification and preservation of historical events lies outside the norm of most archives.

The second lesson is also about economic incentive, but of social economics rather than strict monetary concerns. One facet at the core of the popularity of sports is narrative. Stories from baseball's past are repeated at least yearly; stories from a career are repeated at least weekly; stories from a season are repeated at least daily. There are grand narrative arcs and smaller subplots that help define, reinforce, assess, predict, and synthesize events, personalities, and the organization as a whole. The footage of Yogi Berra jumping into Don Larsen's arms after his World Series perfect game is hauled out during the post-season to help give shape to what is about to occur and why it matters (i.e., why you should be watching): these are the moments when the pressures make the normal activities of the regular season more difficult, when the great ones rise to the challenge, and when there is a constant opportunity to see something historic happen from unexpected sources. After the 2010 post-season, footage of Roy Halladay will now be forever linked with the Don Larsen footage. The new story snaps neatly into the continuing narrative to expand and confirm: Heros still exist. The present is tied to the past, which establishes an underlying structure of stability to the unpredictability of life. There is value derived in looking back and hope in looking forward.

Based on my ramblings, the lesson here obviously isn't one on proper gramatical and logical structure. Rather, what I think we can pull out from the MLB experience is, at a basic level, further proof in the value of a comprehensive approach to metadata. The greater the degree of intellectual control, the greater the degree of reuse of materials. Enabling deeper levels of access promotes more extensive access and novel uses of assets, and these efforts can be enhanced and made more efficient by identifying the parameters of what data is most pertinent.

At a more complex level is a lesson in the high value of actively cultivating social significance and in developing stories around collections to better advocate for them and promote access. The past occurs[?] and is documented, but it requires exposure and contextualization to maintain wider relevance. Archives occur (though they are not necessarily documented), but their contents require exposure and contextualization to promote their relevance within an institution and to a wider public.

It is not that un-monetized content is less valuable, but its true value is just more difficult to express -- just as it's more difficult to define the benefit of the utility infielder, the bunter, or the long reliever in comparison to the power hitter and the staff ace. Of course, that divide in baseball has been narrowed by the hard work done by stat head sabermetricians over the recent past number of years. Hmmm...