Enough With The Vinyl Already

Unlike other dead media, the vinyl LP refuses to fade away, as the story of the vinyl revival assures us. Starting (at my first notice) in Slate and ping-ponging across the pond via Twitter (oh wait, or was that 2007?), the tale has ended up back stateside again on the editorial page of the New York Times. There the story was anew, this time paired with a similar short blurb comparing the use of ebooks and physical books (spoiler alert!: ebooks think they're all that, but they're not!).

And although many people will probably say "This is what you get upset at the Times about?!", I have to say I'm disappointed that this trend story disguised as news (statistics make everything relevant and meaningful!) has been endorsed by the editorial board with no comment. My initial problem here is that uncontextualized statistics lie. The first time I saw this story the author actually underscored the fact that, even though the percentage gain in the number of units sold was impressive seeming (especially in graph form) 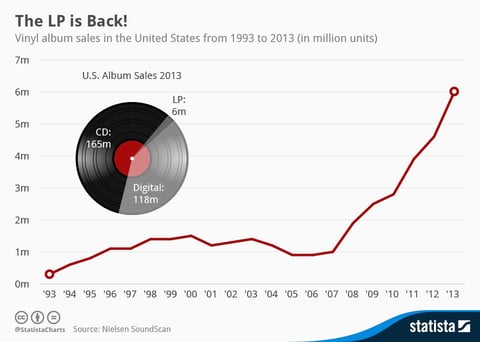 it looks like less of a revival when you see that the total number of units (around 6 million) is only about 2% of album sales and looks less impressive next to the almost 300 million in CD and digital download sales. Of course course the author pulled the soft journalism trick of ignoring such inconvenience to swerve off into a storyline with more traction about the death of the CD and the fetishization of the past. But The Times version and others just ran with the eye-catching graph and the numbers that thumb their nose at this whole digital ballyhoo.

And this is the second issue I have, that stories like this continue to stoke the digital/analog culture war, obviously pulling for the poor underdog analog that is being mindlessly wiped out by digital Skynet. This is a false dichotomy and a false battle. Digital and analog both exist and are not mutually exclusive. Their continued existence is the decision of the corporation that manufactures them, which is not a conflict over quality or beauty.

But more to my point is that, though it would seem that the worship of analog over digital would support archives, it is actually a detriment to preservation.

I'm talking primarily in regards to audiovisual materials here. It is a fact that tape, film, discs, and other audiovisual formats require reformatting at some point in their existence in order for the content to remain accessible. At this point in history, digitization is, in most cases, the most viable reformatting option. We must reformat. We must (in many, but not all cases) digitize.

The silly argument or obsession over access formats, (LP, CD, MP3, VHS, Betamax, DVD) confuses the issues and clouds the facts of the role of digitization and caring for both digitized and born digital collections. When the popular discourse comes down to arguments that are based on consumption, marketing, personal opinion on quality, and cultural shaming, and where failures of the "enemy" are cheered as heartily as one's own successes, the importance of the work that needs to be done and the financial and organizational support allocated to it are minimized. The access formats become a stand in for the preservation formats, both making the preservation formats seem bad and making is seem that the access formats should just be used for preservation. Not only does one have to advocate for the importance of preservation and the archive, but it is also an uphill battle against the idea that all digital formats are as unstable as a CD.

Yes, there are poor decisions and failures with digitization, just as there is in life (please don't remind me). Unlike in life, these failures are not related to rates of consumption, but as with many things, success comes with the having the right information and the time to make critical, informed decisions that aren't based on eye candy graphs, or overly influenced by the sweet hum of vacuum tubes and the click of the LP arm.