Fear and Planning in the Archives

If you're reading this today, and if today is October 27th, then it's the World Day for Audiovisual Heritage! WDAVH (say that five times fast) is an international celebration of the importance of audio and moving image archives, both for the significance of their collections as well as critical need for preservation, hence this year's theme "Archives at Risk - Much More to Do!"

This time of year I always wonder if WDAVH was scheduled near Halloween because, when you look at the state of what needs to be done to preserve collections, it's downright scary. Scary like buried alive scary. Scary like scary clown scary. Scary like a sharknado, with sharks carrying chainsaws and guns that shoot knives.

Now of course it being near Halloween and me being unable to not overanalyze any little thing (still thinking about whether there needs to be some commas at the beginning of this sentence...) one (i.e., me) begins to think about the nature of fear and the purpose of being scared. Or more to the point, what is the efficacy of using scare tactics to nudge (or shove) people to action. What is the role of the doomsayer as soothsayer? Will it prevent us from being pallbearers for our audiovisual heritage? Does it truly help our fellow wayfarers in archives?

Unless you were expecting it earlier, this seems the likely point to trot out the 10-15 (9-14? 8-13?) year timeline for the end of the large scale viability of magnetic media. Now that is scary. Not monster all up in your face scary, but scary like spider laying eggs in your unwashed hair scary. Insidious. Tacit. Sudden. Not the fire next time, but the sloughing beast.

While this timeline is increasingly agreed upon (and despite it being fun to spook people with at conferences) there can be a negative reaction to setting dates to things like this. It is definitely good to more solidly quantify the issue in order to better visualize and comprehend the reality of an end point, but you can also lose the nuance of the argument or, ironically, lessen its impact if the quantification is taken too hard and fast.

The 10-15 year (for the sake of simplicity and lost nuance) target does not mean that all tape will turn into a pile of goo on the same date, but merely that playback and transfer will become increasingly difficult, less reliable, and more expensive as media, hardware, and knowledge fail. Archives are already under the gun and financially strapped as is. What will that near future bring?

Whether you're familiar with our Cost of Inaction Calculator or not, the purpose of the tool is to try and get a sense of that future. The 10-15 year target is an underpinning impetus for the tool and shapes it to a degree, but ultimately that is only one scenario, a skeleton to hang numbers on in order to track budgets and storage needs and levels of effort across a given period that moves beyond just the upcoming fiscal year. If you only want to look at the next 5 years of what approximate costs will be, that is possible, as well as looking at the next 50 years for other media types (or if you don't believe VHS will ever leave us).

Chris Lacinak's recent keynote presentation on COI given at the 2014 Fédération Internationale des Archives de Télévision / The International Federation of Television Archives (FIAT/IFTA) World Conference goes into the planning details and outcomes better than I can here. What I can say is that fear as a prompt is only that -- a prompt for a certain audience in a certain situation. It does not ensure action will be taken. It does not detail exactly what actions need to be taken. It does not respect the action that is already taking place, performed by the many admirable professionals in our field.

What can we afford to get done in the coming decade? What is acceptable gain and acceptable loss? We can't recover sunk costs of prior preservation efforts, but how can we better prevent future sunk costs? We know what needs to be done -- what does the path there look like?

On this WDAVH we look to Archives at Risk and the work that still needs to be done. Hopefully the jump-scare of the risk to media collections is raising awareness in administrators and funders and the public, but we need to be ready with the follow up, with the action plan that will get the work done. If we can get them to open the door because they heard a noise, we don't want to end up being the old "just a cat" they can ignore. 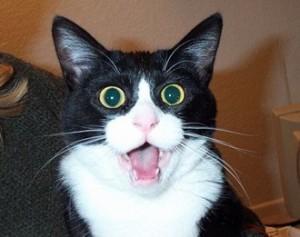