Getting Out Of The Fog

I had a mildly indulgent movie-watching weekend, having gorged on two DVDs (John Carpenter's original The Fog and the first disc of The Adventures of Brisco County, Jr. -- I am not a prideful man.) and one theatre-going experience. I wouldn't say that three flicks in one weekend is indulgent -- there have been times where that was an average day (I am not a prideful man.). What was indulgent was taking the time to listen to the audio commentary on both DVDs, something that I rarely ever do (Okay, now I am a prideful man).

I dig the whole film-school-in-a-box concept that a stack of DVDs plus audio commentaries is a useful learning tool, but maybe for the same reason I've never cared for reading scholarly introductions to novels I'm just not that into it. Or, likewise, maybe I've been too influenced by the insightfully codified breakdown of Commentary Tracks of the Damned to have much patience with them.

Of course I'm not a total curmudgeon (or pretend not to be) and do enjoy certain commentary tracks. I will always listen to the likes of John Waters and Werner Herzog, and I have a special affinity for listening to the filmmakers, producers, and crew members from older B-movie and horror films discuss all the tricks and workarounds they had to figure out in order to overcome lack of funds, inadequate equipment (and sets and actors), and other roadblocks of low budget filmmaking. I just happened to hit the perfecta this go around in the chance to listen to John Carpenter and Debra Hill discuss the struggles and solutions in making The Fog as well as to the handsome, handsome raconteur Bruce Campbell. 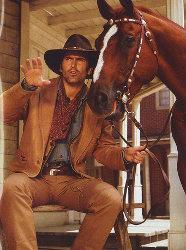 An interesting convergence between the commentaries was a repeated focus on the differences between filmmaking and special effects in the past and contemporary, primarily digital processes. For Bruce Campbell (and series producer Carlton Cuse) these musings are more about nostalgia and appreciation for a filmic past. They point out various shots and props that would now be created with green screen or CGI effects rather than with miniatures, foam, location shoots, and optical trickery, but equally important to them is waxing poetic about the connections their production had to old Hollywood. They put forth that they were likely the last people to use certain Western sets and ranches that are probably housing developments today, and they are proud and feel lucky to have employed the actors, stuntmen, horse trainers, gun wranglers, and other crew that had been working on films and television shows for 40+ years and were at the tail end of solid careers.

Carpenter and Hill have a similar gee-whiz-look-what-we-did attitude -- perhaps even more so since they appear to have had a lower budget for The Fog than the Brisco County pilot episode did -- but there's a certain tinge of sadness to their reminisces. Campbell and Cuse have a dang-we're-lucky nostalgia for film history; Carpenter (and maybe Hill) seem to have an elegiac nostalgia for their own past, a period of their lives when they were young and energetic and driven to succeed at all costs, when creativity came easy and the critical plaudits flowed from alternative and mainstream interests alike.

I'm not sure I can rope Hill in here -- she went on to a great degree of success as a producer and as a pioneering woman in Hollywood executive circles -- but, in spite of some secret-success-upon-reassessment films*, Carpenter realized very little widespread accolades after Starman in 1984, only 4 years after The Fog. He would seem to have a much greater feeling of loss for the successes of his youth

*No knock on Carpenter here -- I've always been a fan of Big Trouble in Little China and They Live, and Cigarette Burns is one of the best Showtime Masters of Horror I've seen.

Carpenter's lament very much seems to follow the pattern set out by Raging Bulls and Easy Riders -- the young, innovative, Nouvelle Vague-ish director who, with significant support from a female work and/or life partner, makes some revelatory low budget early films, transitions to bigger budget studio fare and, at some point, ditches the woman and makes a bloated, ego-driven project that is seldom fully recovered from.

I realize it isn't entirely fair to psychoanalyze Carpenter from afar, but as an English major from the 1990s focused on authors from the 1790s, such was my training. I will say, though, that this is nothing personal. Or, rather, it is deeply "personal" to me. What I'm interested in here is how one maintains one's motivation through success, ease, and beyond.

There is a fascinating side note to the research Mark A. Greene and Dennis Meissner did for their landmark article "More Product, Less Process: Pragmatically Revamping Traditional Processing Approaches to Deal with Late 20th-Century Collections". While analyzing processing times per cubic foot of (paper) archival materials, they found that institutions which received large processing grants had significant drops in processing rates. Significant as in going from averaging around 150 feet a year to around 50 feet a year. In the authors' experience, spending $200 per foot in staffing and supplies was not unusual, but according to NHPRC records grantees often spent over $500 per foot on processing projects.

Greene and Meissner are puzzled at such actions and ponder the reasons, whether it might be that an influx of resources makes institutions let their foot off the gas a bit or whether the institutions focus in on detailed item-level processing rather than using the windfall to cover more materials at a higher level. It's hard to know the reasons for sure, but the situation is reminiscent of the typical Walk Year scenario in professional sports: In the final year of a contract an athlete who had some early success but has dropped off a bit in production suddenly regains their fire and has a career year. Come the off season they get a long-term monster contract based on that season and, very often, immediately settle back to the former trajectory of complacency or late-career decline.

This is not to suggest archives are complacent (nor in decline) -- a 9-month contract cataloging gig does not set one up for life like a guaranteed $80 million -- but rather this is a consideration of the initial hurdles to implementation and the ups and downs of long term efforts that must be managed intelligently in order to achieve or sustain success.

The backlogs of work related to audiovisual preservation and the resources required to perform that work are significant, which is why it is so necessary to continue to develop innovative and efficient approaches to that work. I love cinema for the stories and visuals, but I also love it because I am inspired by the kind on innovation directors like Carpenter (or cinematographers, effects crew, etc.) use to take a vision from their heads and make it appear on screen. I'm lucky enough to get to see a number of archives use that same drive and creativity to achieve their goals, and lucky enough to work on those kinds of solutions as well...Hopefully in a way that will make the commentary track to my life a bit more interesting down the road.