Maybe It Should Be Living Dead Media

I've been a long time fan of zombie movies. And I'm old. I'm letting you know this so you know that I'm not some Johnny-rise-from-the-dead-lately who jumped on the zombie bandwagon with World War Z or The Walking Dead.

Artist's rendition of the author.

...but I still do watch TWD. Setting aside the flaws in scripting and character that plagued the first few seasons, what actually disturbs me the most about the show is the lack of fidelity to the original zombie concept.

What does this mean, exactly, and what does it have to do with archives? Well, from my point of view the Romerian zombie was powerful because (at least early on) it drew on a more catholic approach to the idea of the christian soul, and in that a conflict between the concept of death plus eternal life (of the soul) and the continuing 'life' of the physical body. The rising zombie complicated this concept by animating what should have been the mere husk while also causing anxiety in the characters when trying to dispose of the living dead (especially when dealing with a close relative or friend) and in the audience processing the re-animation and disposal (perhaps fed by the rising fear of cultural secularism?).

TWD does actually touch on this issue from time to time, but to me it comes off as much more secular. The loss of a close person and the need to violently dispose of them seems more about a concern with the known personality as well as the impact of the act of "killing" on the remaining person, not a concern with the soul of the departed and its place in defining or animating the person. It does not seem like there is a precedent of religious belief in the conflict. The characters start from a non-religious standpoint and there is no crisis of faith in seeing the dead rise and to have to dispose of them. The crisis on TWD is the loss of social structure and a Humanist concept of humanity and of the role of the self. There is an ethical dilemma to the fall of polite society, but that seems to be something different.

Not to get all eschatological up in here or be a little to precious in my analogy, but this does seem to relate to one of the core conflicts of archiving audiovisual materials. In short, how do we deal with the physical object of media and the content? Where do we separate them and where do we say the one cannot exist without the other? It isn't the soul, but we definitely do imbue a certain amount of importance (and reverence) for the original object, and in the way the content is presented when tied to that object. How do we deal with the decay and disposal of the original as the content moves on? Once the content has been migrated, how long do we retain the original item and how do we dispose of it with the proper degree of ceremony and reverence? Or do we believe that the content is inherently tied to the original carrier (or carrier type/format) and once those are separated the content does not truly exist on this plane?

If we want to continue down this rabbit hole (by we, I mean probably just me) and strain our analogy even further, we could even suggest that a fear of disposing of the original object relates to the 19th century fear of being buried alive. The uncertainty of the medical profession and the misidentification of death in that period led to anxiety around burial, as well as the creation of many mechanisms (such as a bell tied to a string that ran down into the casket) to try and prevent death after live burial justincase.

Similarly, there can be a tendency to hold onto apparently too decayed or too obsolete media justincase a restorative solution is discovered at some point in the future and a sloughing, lurching beast of a U-matic can somehow be played again. Though really, the patching and scavenging of decks and black magic means of getting media playable are more in alignment with Frankenstein than with zombies...

I'm tempted to try and now tie this topic to the building of Gothic cathedrals and Puritan conversion narratives, but I'll try to stop before I continue to bury myself deeper under the misty moor. 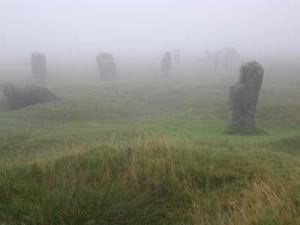 This sentence is just the compulsion to write something that doesn't end so suddenly without a real conclusion.

***As with many "lesser" genres, the continuing relevance of the gothic or horror tradition is not about gore or scares or making too much light of such things, but about using generic conventions to analyze ideas or current events.