The worst part of my job is dealing with rubber bands in collections. No exaggeration. I am not afraid to say I hate them. I absolutely detest them. That wasn't always the case. I used to have bags of them around when I had a paper route. Always carried bunches in my pocket, futzing around with them making lark's head knot chains or seeing how far I could shoot them across the room. Not now. Now they are abhorrent to me.

Don't misunderstand me here. This is not like the head-slapping frustration or gentle weeping over preventable damage that most archivists feel about paper clips, staples, tape, and other joiners/adhesives. No, this is a Cronenbergian level of revulsion, of horrified disgust that creeps up from the pit of my stomach and burrows in at the back of my head to haunt me.

And rubber bands are not like metals or adhesives because, for the most part, they are not causing physical damage to the materials I work with. There are exceptions (loose film reels on cores bound by a rubber band) but mainly I see them used to group together related assets or to bind paper records to the object. Inevitably the rubber band dries out and snaps -- either when slightly handled or on its own -- or even just crumbles away.

It is these rubber remains that revolt me. Sometimes they still have a slight elasticity and move slowly (yet incompletely) to revert to their original size, like a dangerous creature that hasn't noticed you yet so you freeze up and praypraypray it doesn't see you. 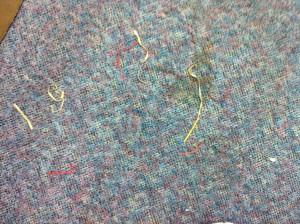 Other times they just break apart, sloughing their dead particles over everything else. And whether they crumble or you pull them off, you're left with a pile of ugh that looks like worms or maggots. You know it's nothing, but fear it may start writhing at any moment. 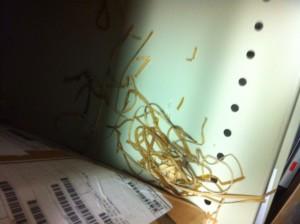 And somehow -- this is the worst -- somehow a rubber band can both desiccate and melt, leaving a residue on things or even hardening and adhering to an object at the same time as they become dried husks. It's unnatural, suggesting something between life and death, like the dried out bodies of potato bugs littering a garage corner.

But when I said somewhere up above (I don't know where -- use CTRL-F or something) that rubber bands generally are not causing physical damage, I did not mean that they are not causing harm. There is a great deal of damage to our intellectual knowledge and control of materials when rubber bands are used in this way. Specifically, as a stand in for labeling, documentation, or catalog records. What I typically see is that one tape (or simply a piece of paper) is labeled with descriptive information and the remaining bound tapes are unmarked or labeled as Tape 2, Tape 3, etc. Or the only content information is on papers that were once bound to the tape but that are not mixed with other tapes and papers that have separated.

This may not seem like a huge problem because, from the a paper point of view, it would seem like just a little additional time from the archivist or researcher to sort through and use contextual clues to properly arrange the papers as well as possible. But without the benefit of labeling, item level records, embedded metadata, or the sort, the identification and arrangement of audiovisual and electronic records is much more time-consuming and costly. The removal of paperclips and foldering of papers is an added cost to collection processing, but if that processing/access first requires (most likely) reformatting a video and then watching it, the level of cost and time explode.

When we imbue an object like a rubber band with implied meaning, that information is hopelessly opaque and severely impermanent. 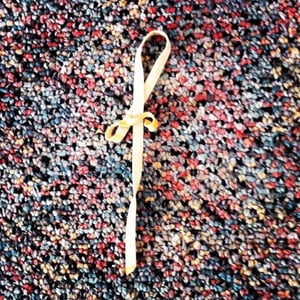 It should be a temporary tool used for its intended purpose and not as a replacement for the detailed work of identification and description. In a way, all physical arrangement suffers from the same issue. It should not be assumed that order has any persistent, discernible meaning in and of itself outside of establishing context. It is a means of locating objects. At some point the structure of that order will dissolve, as it does with all things (not just rubber bands).

It is increasingly apparent that as creators we have the responsibility to document our work in ways that is clear and usable by us and by those in the future. Likewise, one of our responsibilities as Archivists is to choose and utilize systems and procedures that are transferable and able to be interpreted across systems and across time. We don't know what access in the future will look like. We do know that we need to do what we can to help enable it, and I hope to god it doesn't involve rubber bands.