I caught this Tweet from Archive Alive about a new collaborative website for collecting media related to the Berlin Wall (www.wir-waren-so-frei.de). November 9th was the 20th anniversary of the fall of the Wall, a memory marker I wasn't aware was happening until suddenly being inundated with news stories the other day. The site itself is in German, but that doesn't take away from the great use of images, video, mapping software, and other kinds of web-based functionality that organize, track, and give a fuller sense of the history around the Berlin Wall and Germany at the time. The topic (and the forgotten significance of this date) really got me thinking about what a seminal event that was for millions of people at the time, but also how it's really a touchstone event for my own feelings about history, memory, and the importance of archives.

It's difficult to recall now, but growing up at the tail end of the Cold War was kind of a fearful time. I did not hate the Soviets or communists -- they were just people, living their lives like everyone else -- but I knew plenty of people who did, and there was a constant dread hanging in the air that some leader on either side could just lose it at any minute and utterly destroy the whole world. Maybe it was because I was young, and maybe children today feel that same way, but I have a very specific memory-feeling associated with that period that I don't have now. 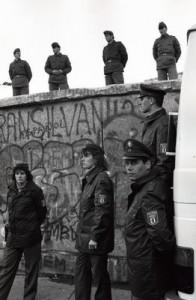 Staying out of any ideological argument over the superior politico-economic system or any kind of post-facto Ostalgie, it seems difficult to argue that the Berlin Wall was a good thing. Denying freedom of movement, communication, and open access cannot be good for a society.

I saw the ecstatic reactions on the news in Berlin and the Eastern Bloc as these shackles were left to fall open, but the magnitude of the reaction was really brought home while I was far away from home, living in Pardubice, Czech Republic in 1997-98. I listened to stories from my landlords who had lived under both Nazi occupation and Communism about the ways they learned to survive; from friends who had had educations and careers derailed because of petty party politics; from the people who looked at my passport with wonder not necessarily because they loved America, but because it represented the ability to move and live freely in the world; and finally from the people who just wanted a chance to share their story with someone. The depth of the stories and emotions really opened my provincial Oregon eyes.

What shocked me equally was the richness of eastern European history - even of recent vintage - that I had not been taught while growing up, simply because we did not deign to study the enemy. Some shackles are much less noticeable, I suppose.

So here we are now, at this anniversary of great world and personal import: Possibilities opened up to millions, a decrease in fear and turmoil, and possibilities & knowledge opened up even to we who thought we already had them all. And yet, it took a Twitter post on some online images for me to even remember any of this. The memories are there, filed away, but the context and the lines of access fade.

This makes me consider my siblings and their generation. Not much younger than I am, but just enough that it seems they have no concept of these historical events that have caused such strong feelings in me. To them it may just be the last 10 pages of a history book, some funny hairdos and clothes, or some bad pop music.

How do we maintain the intangible? The unreliable? The question then becomes not just one of the persistence of an object, but also of the associated stories and memories, the unwritten annotations that provide added context and interpretation.

But perhaps what feels like grasping at fluttering memories is not so problematic as it seems. Perhaps there is a lesson here on the symbiotic relationship between image/sound and memory. One may fret about the fading of memories, but the visual and aural prompts created by media reach deep into the brain like the way that tastes and smells do. This is not only why we need to preserve audiovisual materials, but also why we need to have ways to access and use them. It's how wir werden frei bleiben (we will remain free).